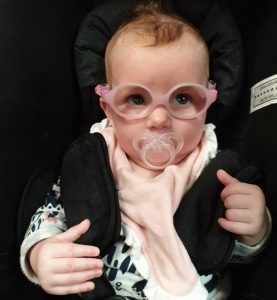 Pediatric Refractive Infantile Nystagmus needs prompt attention. This three month old girl is so long sighted (hyperopic or hypermetropic) that she could not make her eyes focus. Her eyes moved back and forth. . When the eyes move  continuously and rhythmically, the eye condition is called nystagmus. When the infant wears her glasses it allows her eyes to become more steady with less eye movement and so the baby’s eyes can develop normally.

A young mother saw me because she had noticed her three month old  could not fixate on anything and instead her eyes continuously moved.  Long, continuous, rhythmic eye movements are called nystagmus.

I put in some drops to make the pupil bigger for me to look in with  a retinoscope. It sends in a parallel streak of light. By putting some quite thick convex lenses in front of her eye, and watching the returning image move faster and faster,  it became apparent the little girl was very long sighted and needed glasses to help her vision develop normally.

At her follow up visit the glasses had helped a lot. The baby’s eyes were much steadier and showed less nystagmus movement, and the baby could now fixate on points of interest.

It is fortunately not that common a condition. If left untreated in a child these movements can become a  permanent thing so the sooner the baby wears glasses,  the better.

Contact lenses are another option. The main issue there is insertion and removal in a baby is not that easy.

The tiny glasses have a band that attaches around the head. We chose a slightly large size so they last longer as she grows.

It is quite possible for an optometrist to test your baby’s eyes. In this case I also sent her to see an ophthalmologist within a few months, as well, but I felt it was better to get things moving as soon as possible.

Other things you can look for in baby’s eyes include watching for an eye that turns in, or a tendency to tilt the head or to close one eye. These signs often show up more when the baby is a tired or sleepy.

or call us now: